I’m programme co-ordinator for the next ARMMS conference. The job mainly consists of finding people to present technical papers at the conference. These have to be of specific interest to engineers ond researchers of a RF and microwave background. If you are interested in presenting a paper contact me.

This is an outfit I have been following since they launched a fund raising round on Seedrs. They are now trying again on Crowdcube. It seems just what is needed in the independent consulting world. They are based not to far from me as well.

This site has grown a couple of aliases. You can now get here via my analogue.guru domain or the rfdesign.guru domain.
I’m pleased with getting these. They will help with self promotion and keeping Bayford Systems alive while I’m away working for Golledge Electronics. I can see why I got away with getting analogue.guru, The domain squatters would be using American dictionaries so not have squatted the English version. I am surprised no-one had bagged rfdesign though. It’s such an obvious choice. Perhaps the launch of the guru top level domain (TLD) has not been sufficiently high profile.

I have taken a job with Golledge as their Chief Engineer. This means that I will have very little time to work for Bayford Systems customers. I will be back at a later date with a new and exciting business model.

I have had two main clients, both ex employers. I gave a chat about the largest project. This is taking on work from another contract designer who has been overloaded so was not able to complete the contract himself. The details of the end use are vague as the end client does not want to be identified for commercial reasons.
The original task was to design a radio board around a transceiver chip that had already been chosen. Normally if I were taking on a project like this directly it would start with a quick survey of what is on the market at that time. The world of semiconductor manufacturing is constantly changing, so although I start the search with chip manufacturers I have used before, or have picked up through the trade press, a web search is still needed to check for any new start-ups that might be making something useful. Other components are selected based on my long experience of who produces the best quality parts at a reasonable price and on ease of availability. Design calculations are usually done on a spreadsheet often reusing work I have done before or adding to the collection of formulas from manufacturers application notes or technical literature. Then I can create the first version of the schematic. A specialist software tool is used for this with as well as creating the schematic, it also derives a parts list, often referred to as the Bill Of Materials or BOM, and a netlist. The latter is important in checking the PCB design matches the schematic connectivity.
Its at this point that I usually do the first circuit simulations. The simulation will include additional elements to model the likely effects of the PCB layout. The additional elements are based on rule-of-thumb worked out over my years in the business. Using the simulations, component values can be adjusted to optimise performance. When the results are satisfactory I start the PCB design. The design is done using specialist software (a type a vector drawing package) that is associated with the schematic software. Although there are software packages that automate the PCB design these are not suitable for radio work. After the PCB layout design is complete the tracking can be simulated and the results used to refine the rule of thumb entries in the first simulation. More circuit optimisation may be necessary at this point.
With PCB and Schematic design complete a package of information can be generated for contract manufacturers to use to make the prototypes. I prefer the approach of contracting out the whole component purchase, PCB purchase, and assembly process to one contract manufacturer. In the past this would have been done in house with hand assembly of the boards, but modern components are just too small for this and need robotic placement and soldering.
Testing of the prototypes was held up by software not being available as the customer was too busy with other projects to write it. I therefore bid for the work and won a useful extra contract. The software task revealed problems with chip versions, which had to be resolved by changing the chips on the prototypes to the latest version. The chip manufacturer was most unhelpful, as he would not reveal what the differences in the versions were. The simulation work paid off and the deign needed only a couple of minor tweaks before being ready for delivery.
The customer wanted to do some range tasting so another useful contract was won to box up two of the prototypes and modify my test software to make it suitable for range testing.
In all a useful start for my business and useful software skills picked up along the way.

I use openSUSE with the KDE desktop on one of my PCs. They have just added a new GnuPG key manager which was popping up at startup. This has prompted me into setting up a key pair for email encryption. It can only help with customer confidentiality. The public key can be found on the contact page.

I have just returned from an excellent business networking breakfast at the Hunters Lodge with a group of local businesses. The group was considering a change of name. Consensus seemed to be something with Blackmore Vale in the title. The group has a page on the Wincanton Window web site.
Some of the other businesses represented:

BSL’s accountancy needs could well have been sorted by this meeting.

As a circuit designer and systems engineer most of my time is spent in front of a PC screen. There is still a need to test my creations and work around unexpected events though. One of those unexpected events was finding that there had been a misunderstanding over the part number of the connector that mates with the connector being fitted to the control board designed by my customer. To test my boards two male connectors had to mate. The temporary solution is to produce what is often referred to as gender bender. In this case two female connectors soldered back to back. The slight difficulty with this approach is that the connectors are surface mount types with a 0.5mm pitch. With a steady hand, a fine soldering iron tip, and a good stereo microscope I managed it. 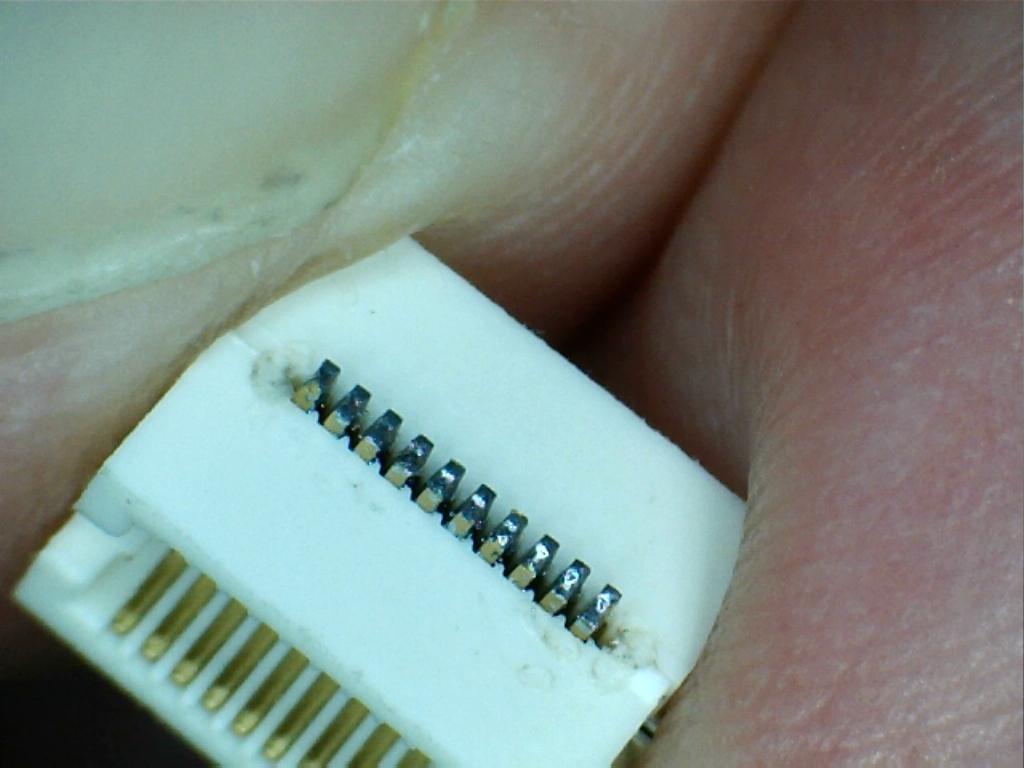 Back to back SM connectors

I first tacked the two together with blobs of hot melt glue at either end. Dong this quickly allowed me to make a final adjustment to the alignment of the two connectors before the glue cooled and set. I didn’t have any really fine solder so opted to use solder paste instead. The trick here is not to use too much. I put a smear of paste across the pins them wiped most of it off. I then heated each pair of pins with a soldering iron enough to melt the solder on them but still leave the solder balls in the paste between adjacent pins solid. Finally I cleaned away the unwanted paste with solvent and a short bristled brush. This was quite hard as the brush bristles were as wide as the gaps between adjacent pins.
This goes to show that the old skills are still needed even in this modern world of ultra small surface mount components.

This is a useful agency for quick consultations without the hassle of an individual contract to provide the service.
Here is the link to consult with me via Maven.